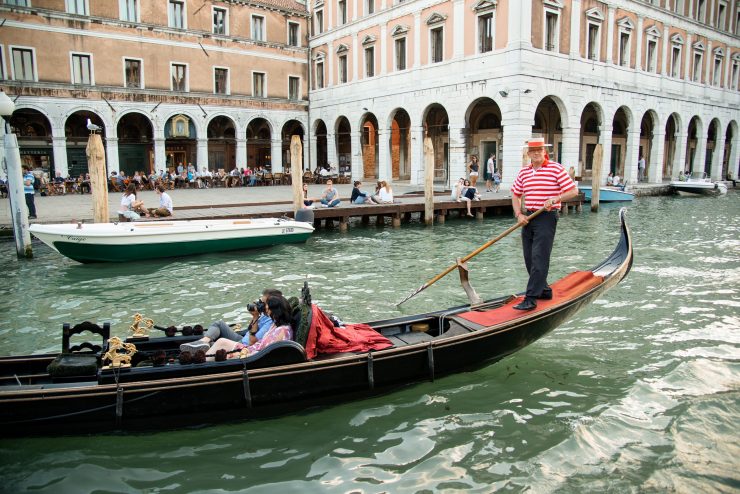 Going to Venice, Italy, is a dream vacation for millions of people every year. Many travelers return again and again for the romantic city’s beauty and charm. Venice is revered for its art and architecture. Here are some of the top things to see in Venice.

The absence of motor vehicles makes this place unique. People get around by walking along the narrow streets, or riding on the network of canals. The waterways pass under lovely bridges and lead to stately old buildings such as palaces, churches, museums, and theaters.

The community center is Piazza San Marco, or Saint Mark’s Square. It is surrounded by buildings erected in the 1500s that house shops and restaurants. Tourists take pictures, relax at sidewalk cafes, and check out fellow visitors from throughout the world.

One of the eateries, Caffè Florian, has been serving meals since 1720. Upstairs is a museum showcasing Venetian history and art. People can enjoy a panoramic view of the square by climbing a clock tower built in 1499 that extends above a Renaissance building. There are a number of statues, monuments, and fountains on the square, as well.

Related: Top 10 Things To See and Do in Rome, Italy

The piazza’s most impressive site is Saint Mark’s Basilica, one of the biggest and most opulent houses of worship on Earth. It is known as the “church of gold” due to its gold-leaf mosaics. A magnificent example of Byzantine and Italian Gothic architecture, the 17th century cathedral is topped with five domes and a number of spires. The lavishly adorned roof features marble sculptures and carvings. More statues, in front of the church’s ornate facade, include the postcard-worthy Horses of Saint Mark and The Tetrarchs. Additional statues – along with marble floors, decorated columns and pillars, and glorious ceiling mosaics – grace the interior.

Nearby is Doge’s Palace, built in 1340 to house government officials, courtrooms, and a prison. The Venetian Gothic building is now a historic site with a large art museum. The exterior walls sport sculptures from the 14th century, and the roof is lined with decorated capitals. The Bridge of Sighs, erected in 1614, is a covered passageway that links the palace with the former prison. Criminals crossed the bridge following their sentencings to begin serving jail terms. The walk over the canal gave them their last glimpse of the outside world, which was the inspiration for the bridge’s name.

The best way to tour Venice is on foot, but seeing all the attractions requires a public water bus, private water taxi, or gondola. The latter mode of transportation is an iconic activity in Venice. Many couples have gotten engaged while riding in gondolas. The main waterway, the Grand Canal, winds through the city in an S-shaped pattern. It gives visitors a close look at more than 170 grand buildings built between the 13th and 18th centuries. There are palaces, one of which displays the Peggy Guggenheim Collection; and marvelous churches like Santa Maria della Salute.

Among the magnificent theaters on the Grand Canal is the domed Teatro La Fenice (“The Phoenix”), one of the most famous opera houses in Europe. It is actually a recreation, as fires destroyed the initial 1792 structure and a later building. Designers of the current replica took great pains to make it look as much like the original theater as possible, including a soaring ceiling with opulent ornamentation and five tiers of theater boxes on each side.

Tourists marvel at how little Venice has changed since its founding in 827. The buildings, canals, and bridges appear much the same as way back then.